Protests across West Bank against high cost of living 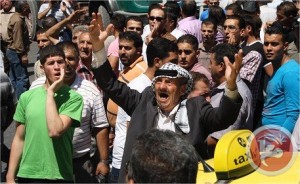 BETHLEHEM (Ma’an) — Angry Palestinians on Tuesday took to the streets across the West Bank protesting the high cost of living and the price rises in the Palestinian market.

From Hebron to Jenin, thousands of Palestinians demonstrated against a rapid rise in prices of fuel and basic products. Protestors called on the PA to abolish the Paris Protocol with Israel, “which rendered Palestinian economy subordinate to Israeli economy.”

The 1994 Paris Protocol regulates economic relations between Israel and the PLO. It has been criticized by Palestinians who say it is mostly beneficial to Israel’s economy.

In Hebron, demonstrators set fire to an effigy of prime minister Salam Fayyad. They chanted slogans demanding toppling Fayyad’s government and putting an end to the skyrocketing prices.

Earlier taxis, bulldozers and public vehicles traveled from south to central Hebron to protest the cost of fuel. Hundreds joined the demonstration in the city center.

A truck driver who joined the protest, Osamah Abu Mayyalah, told Ma’an that he could not provide his family with basic needs as his monthly salary is only 1,200 shekels ($300).

Another truck driver, Rafiq Atawnah, said drivers would not stop their peaceful protests until prices, namely fuel prices, go down.

Groups of youth asserted that their protests were against the Israeli occupation. However, said some of the activists, because of the dire living conditions they had no choice but to take to the streets and protest against the high cost of living, and urge the PA to abolish the Paris Protocol.

Israeli forces arrested seven protestors who joined the mass rally in Hebron including a journalist. Othman Abu al-Halawah told Ma’an he and six others were detained.

In Ramallah, a group of young people stopped their cars in the middle of the street. The protestors closed the main street between Manara Square in the center of Ramallah and the Yasser Arafat Square near the PA security compound.

Some of the slogans Ramallah protestors shouted were: “Fayyad! We are not egg-laying chickens”, “I can’t fuel my car, so Fayyad can take it”, “No to the government of indignity and hunger”, “Until when will we continue to pay your expenses?”, “We will not set ourselves ablaze for the sake of Fayyad” and “We were looking for Palestine, but now we are looking for a sack of flour.”

In Bethlehem, dozens toured the city and closed several main streets to protest the high cost of living. Some were seen beating empty cooking pans.

Tariq Zuboun, an activist in a group of organizers called “Wake from your sleep!”, told Ma’an that demonstrators demanded annulling the Paris Protocol “which keeps the PA subordinate to Israel.”

“These popular activities do not follow any special or suspicious agendas as some people claim, but they are rather popular nationalistic activities,” head of the consumer protection association in Bethlehem lawyer Farid al-Atrash told Ma’an.

In Jenin, Palestinians expressed interest in immigration to other countries so they can earn a living for their families, because they are unable to do so in their homeland.